Using the airnode-starter (opens new window) project you will deploy an Airnode and make requests to it. This project is composed of setup and three steps.

You can skip Step #1: Deploy an Airnode and use the Airnode that we have deployed on Ropsten if preferred. You are recommended to read the contents of the scripts (opens new window) as you run them, and read the entire readme before starting.

In preparation to deploy an Airnode a few items need to be prepared.

You will need a wallet to hold funds for a testnet such as Ropsten. These funds will be used to pay fees to setup an Airnode. Funds on a testnet are free.

Run the following to generate a new wallet, whose mnemonic phrase will be displayed on the terminal and recorded in a .env file at the project root. If you already have a wallet for your desired testnet you can use it by entering its MNEMONIC manually into .env at the project root.

You need to get a provider URL. This will be used both by the deployed Airnode and by you while interacting with contracts. If you will be working on Ropsten follow these two steps.

Adapt the steps above if you will be using another chain. Note that you can use any other provider or your own node. However, if you will be deploying your own Airnode, the provider endpoint must be publicly accessible (i.e., 127.0.0.1:8545 will not work).

This tutorial can be run on these supported chains.

If you wish to skip Step: #1 then you do not need AWS cloud credentials.

Read Creating cloud credentials to create your cloud credentials. Place them at /config/.env, similar to /config/example.env. Do not confuse this .env file with the one in the project root that keeps your mnemonic phrase and provider URL.

Following these instructions to deploy an Airnode on AWS is free (opens new window) as of May 22nd, 2021.

Normally, you would need to do two things before you deploy an Airnode:

For this project, we specified a minimal integration to the popular and free CoinGecko API (opens new window), and prepared the configuration files. We only integrated a single API operation, GET for /coins/{id}, which you can see below. The localization, tickers, community_data, developer_data and sparkline parameters are fixed as "false", while market_data is fixed as "true". The id parameter will be provided by the requester (e.g., "ethereum") under the name coinId. You can make test calls over the CoinGecko API docs (opens new window) to see the response format. 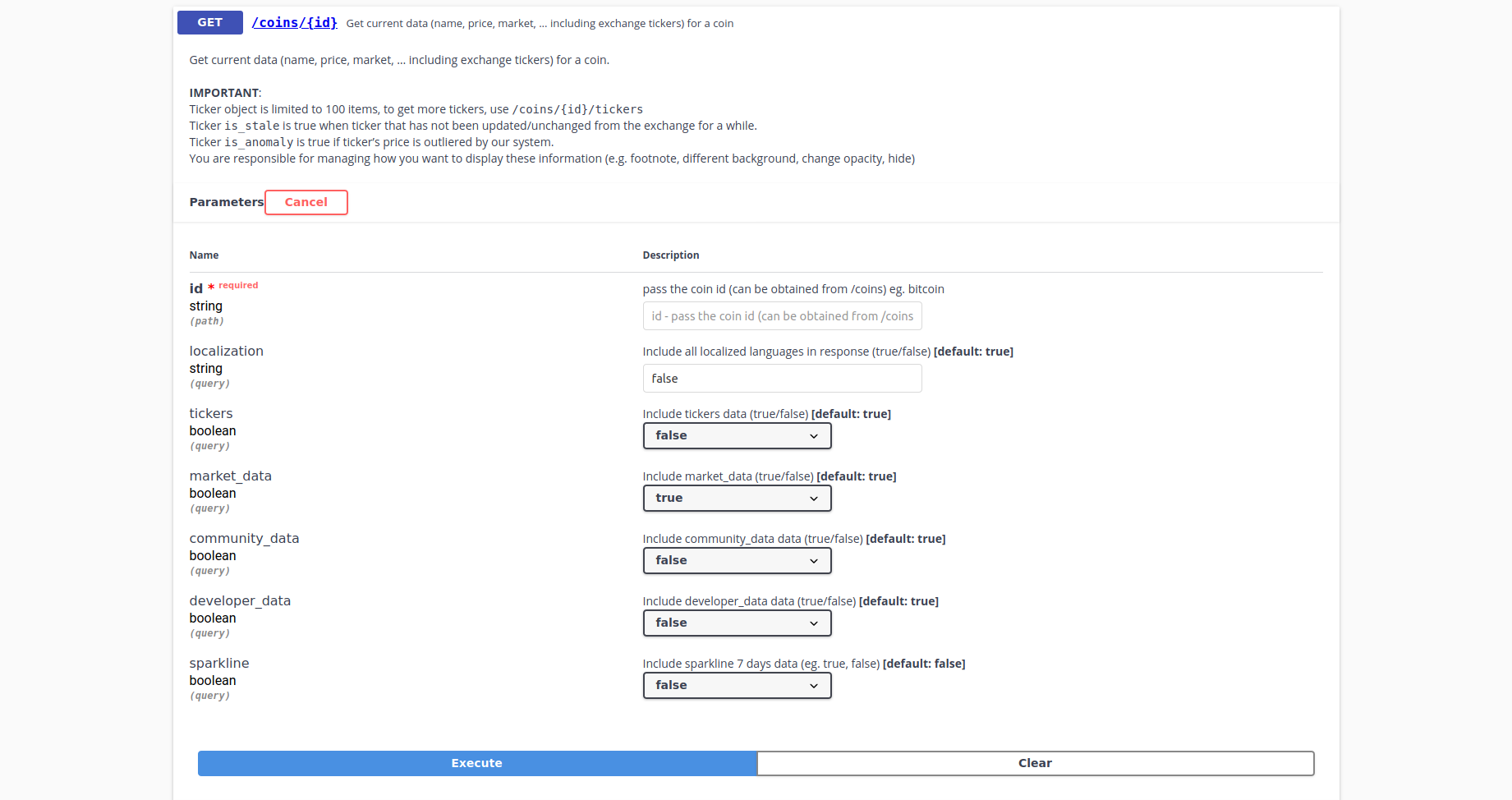 See config.example.json for how this integration is achieved. We fixed the reserved parameters to read the value from market_data.current_price.usd, cast it as an int256 and multiply it by 1,000,000 before returning. No security scheme (i.e., API key) is defined in config.json or security.json because the CoinGecko API is publicly accessible.

Now your/configdirectory should have the required config.json, security.json and .env files. Run the following to deploy your node.

This will output a receipt file with the extension.receipt.json.

Run the following to send your master wallet 0.1 ETH for it to create a provider record for you on-chain.

Your deployed Airnode will use these funds to make the transaction that will create the provider record on the chain you are operating on, and send the leftover ETH back to your address automatically. You will have to wait ~1 minute for this to happen, otherwise the next step will fail.

Run the following to create an on-chain requester record.

You can use this requester denoted with an index in other projects as well. Note that requesterIndex is chain-specific, so you will have to create another requester record on other chains.

Run the following to deployExampleClient.sol.

Run the following to endorse your deployed client contract using the requester you have created.

# Derive and fund the designated wallet

First run the following to derive the designated wallet for the provider–requester pair.

Then fund this designated wallet with 0.1 ETH.

The requests that the client contract will make will be funded by this 0.1 ETH. Note that you may have to run fund-designated-wallet again if you make too many requests and use up this 0.1 ETH (very unlikely).

Run the following to make a request. The request will be fulfilled by the Airnode and printed out on the terminal. Now that the price is on-chain, you can use it in your contract to implement any arbitrary logic.

Try replacing the coinId value in /scripts/make-request from "ethereum" to "bitcoin" and make another request.

Don't forget to take down your Airnode as it is designed to be set-and-forget. When you are done with this project, go toconfig/as your working directory and use the command below where$RECEIPT_FILENAMEis replaced with the name of your receipt file ending with.receipt.json. You can refer to our Docker instructions for more information.

You deployed an Airnode, made a request to it and received the response at the contract. If you want to learn more, see the following resources: